Get an email notification when our next podcast episode is available!

by jon vroman
in Podcasts
no Comments 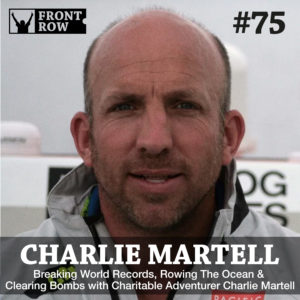 When life takes a turn for the worst, how do you react? More importantly, how do you prepare?

Today, Charlie Martell joins us from Baghdad, Iraq to talk about his 2012 attempt to row the North Pacific Ocean and how he survived an unexpected typhoon that capsized his boat during his journey.

A double Guinness World Record holder, Royal Engineer Charlie Martell is no stranger to adventure. Active service in Iraq, Bosnia and Northern Ireland led to a post-Army career in the humanitarian sector, where he specialized in post-conflict resolution. Working in mine-affected countries such as Cambodia, Angola and the Republic of Georgia opened his eyes to what specialists like him could do for communities living amongst mines, bombs and other debris of war.

Charlie’s previous expeditions include a 300-mile ski-trek to the Magnetic North Pole and a four-man row across the North Atlantic Ocean. Together these expeditions raised more than £250,000 for charity.

In this episode, Charlie shares his inspiring story and talks about the importance of planning for the unexpected. You’ll find out how he manages his mindset during adversity, the importance of visualizing your goals, the Kelly Clarkson song that helped him survive a Typhoon, and why he’s willing to put his life at risk again in a 2nd attempt to cross the North Pacific.

''Somebody at some point has to get across that ocean from land to land. Why not me?'' Click To Tweet

Here’s a quick breakdown of our chat…

For iTunes listeners, get automatic downloads and share the love by subscribing, rating & reviewing here!

Get Your Copy of The Front Row Factor: The Art of Moment Making Today!

If you’re enjoying the show, let us know about it HERE \o/

More from my site

Get an email notification when our next podcast episode is available!

#122: Moving from Fear to Focus, Creating Your Future Regardless Of Your Past and Managing Life 5 Minutes At A Time

Podcasts
1 Comment
Have you ever felt so overwhelmed by your circumstances that it’s difficult to keep going?  If so, then you...

#109: Overcoming Any Fear with Hal Elrod

Podcasts
No Comments
We all struggle with fear at some point or another. But when that feeling of fear goes unchecked, it...

Podcasts
No Comments
If you had a goal and you knew you couldn’t fail, you’d go for it, right? But what if...

#97: Making One Step to the Summit with Mountaineer Lisa Thompson

Podcasts
1 Comment
Finding the absolute edge of our limits is never an easy task, but is a critical part of achieving...